When Ngũgĩ Comes to Nairobi

On this hot Monday in February, the Nairobi National Theatre’s Main Auditorium was full. The eager and excited crowed had come to witness the launch of the latest book in Kikuyu by the great Kenyan author Ngũgĩ wa Thiong’o, Kenda Muiyuru, put out by East African Educational Publishers, the Kenyan press that has stood by this writer for decades. Everyone was there: from old accomplices, with him from the very first, to members of the newest generation to have studied books in school, the most politically conscious of these finding in his example both intellectual and ideological inspiration.2

It’s not often, in fact, that this writer, so emblematic of Kenya, and for many years now thought to be a contender for the Nobel Prize, returns to this country. Ngũgĩ has lived in exile in the United States since 1982, after being imprisoned without trial in Kenya in the wake of an attempted coup against Daniel arap Moi (for the 1977 performance of his play, Ngaahika Ndeenda, I will marry when I want, which offended the authorities). He had come back to Kenya only once since 2004, the year his previous novel, Murogi wa Kagogo (Wizard of the Crow3)was published. That earlier return had had dramatic consequences: he was violently assaulted, and his wife was raped in front of him.

Before the venerable Mwalimu,4 now 81 years old, ascended to the stage, Ngũgĩ’s longtime comrade and admirer Henry Chakava,5 the country’s most iconic publisher, emphatically reminded the black audience to take pride in being gathered for this occasion at the National Theatre of Kenya, which, until not too long ago, had been held and managed by Whites.6 If the reminder, coming 63 years after the country’s independence, is surprising, it invites us to place Ngũgĩ wa Thiong’o’s work in the context of Kenya’s political and cultural history. 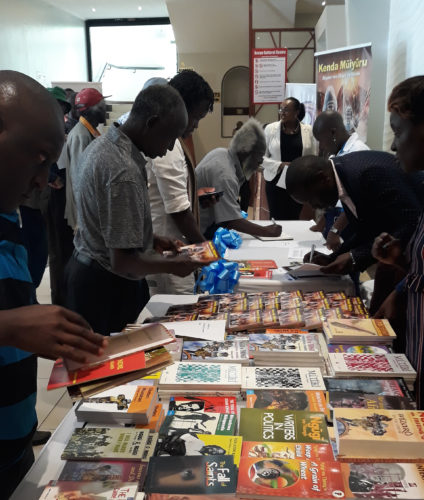 Ngũgĩ’s works take pride of place on the East African Educational Publishers display in the hall of the Kenya National Theatre.

The National Theatre of Kenya opened in 1951 in the White sector of Nairobi, an area that was off limits to Africans, barely a year before the official start of the Mau Mau Rebellion. In response to the uprising, Kenya’s Governor General, Sir Evelyn Baring, declared a state of emergency that would last until 1959, and which—as Ngũgĩ reminded us—entailed, among other measures, the banning of African languages in schools. The construction of the National Theatre, aimed at promoting British culture, was of a piece with the imposition of English as the sole language of instruction in Kenyan schools, at a time when serious literary and media activity had already taken root in the country.

Thus, more than half a century later, it is indeed significant that this theatre, an exclusive institution in Nairobi’s cultural history, should be the site of a literary event promoting African languages. The organizers had wished to hold this panel close to International Native Tongues Day (21 February), whose importance in a country where native languages were once banned was emphasized by both Ngũgĩ and the moderator, journalist Baruthi wa Gĩkũyũ. The imposition of the English language had been so hegemonic that Western literature had come to be viewed as the primary source of modern African literature.7 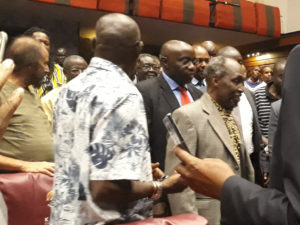 Ngũgĩ’s arrival at the theatre.

Exemplifying the spirit of this international celebration, Baruthi, having made the assembly sing the national anthem, greeted the audience in a dozen Kenyan languages. Then, Ngũgĩ wa Thiong’o took the stage and added Hindi to the mix, saying “Namaste!”—perhaps as a way of recalling the importance of Indian influences in contemporary Kenyan culture, something one of Ngũgĩ’s disciples, Peter Kimani (in attendance) vividly demonstrated in his recent critically acclaimed novel, Dance of the Jacaranda.8

In an elegantly structured, calm and varied address—which included the laying out of positions, the telling of anecdotes, and remarks aimed at public figures, close collaborators, friends, and family members—the Master made his familiar arguments, comparing languages to musical instruments, which we can and must examine without hierarchical thinking, and describing the inability to speak one’s native tongue as a form of “mental enslavement.” He also acknowledged the Kenyan government’s recent effort to reinstate the teaching of Kenyan languages in schools,9 a language and education policy that is expected to promote writing and publishing in these languages. 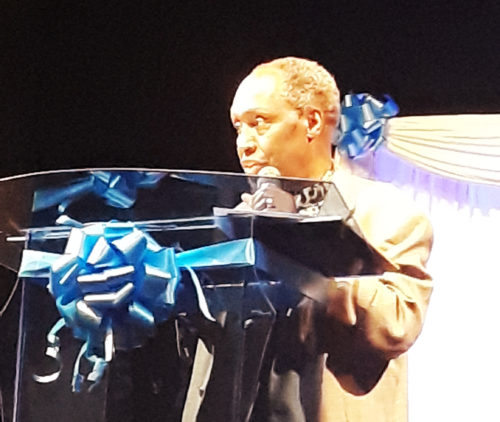 The fact that, in the past few years, Ngũgĩ wa Thiong’o has been able to come to Nairobi without being troubled by the authorities reflects an improvement in his relationship to the powers that be since the era recalled by Henry Chakava, who spoke of the 1982 banning from the National Theater of a performance of Mother Cry for Me, a play written by Ngũgĩ wa Thiong’o and Ngũgĩ wa Mirii.10

For his part, Ngũgĩ wa Thiong’o recalled his and Mirii’s arrest with tenderness and humor. For almost an hour, he entertained the audience with a perfectly apportioned mix of emotions, words of thanks, jokes, and humor. One of the most delightful moments entailed Ngũgĩ’s demonstration of his newly acquired Dholuo language skills. Having been asked by his editor to participate in the promotion of a new book in this language, he told us how he had quickly acquired basic Dholuo skills on YouTube, to the point of even composing a poem in it. This funny demonstration of the ease with which one can learn African languages on the internet well serves his main point about the importance of the use of African languages in speech, teaching and writing.

Those of us unable to read Kikuyu must eagerly await the English translation of Kenda Muyiuru, described by the author as the first epic saga in Kikuyu, which will be published as The Perfect Nine.11 Official launch and unveiling of the book.