Although protests are relatively rare in authoritarian regimes, they not only periodically occur but occasionally also bring down well-entrenched regimes with relative ease and in short periods of time. This was the case during the 1989 revolutions in Central and Eastern Europe as well as during the recent wave of Arab uprisings that spread throughout the region in 2011. In both cases, the political and academic community, as well as the people and activists themselves, were caught by surprise by the emergence and success of popular protests. This raises the question of why popular challenges to authoritarian regimes seem to appear so suddenly and what leads to the inaccurate assessment of the regimes’ strength and stability.

In order to address this puzzle, my doctoral research examines the variety of protest in authoritarian settings and regime  vulnerability to contestation from below. I focus primarily on forms of protest short of collective action since authoritarian regimes – characterized by high levels of repression, severe limits on citizens’ liberties, and limited institutional access – disrupt regular patterns of communication and association between people, which presents substantial challenges for the emergence of organized, collective protest. Moreover, I argue that in these settings, such overwhelmingly personal, fragmented, and uncoordinated “everyday forms of resistance”1 not only form the thrust of protest but also carry a stronger political dimension than in politically open regimes due to authoritarian states’ tendency to blur the public-private distinction, effectively “politicizing” private life. The importance of these forms of protest is generally overlooked by the standard approaches because they tend to analyze regime stability, rather than vulnerability, and focus primarily on challenges from above (from the different aspects of the security apparatus or the
relevant elites) and the various strategies of co-optation to ensure their loyalty.As a result, these approaches are insensitive to
the variety of ways in which people routinely resist authoritarian regimes and their policies despite repression, as well as the impact such actions can have on their own or as the basis for future collective challenges to the regime. 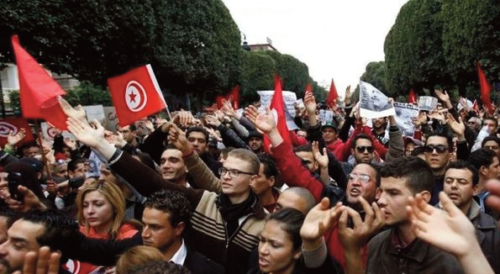 To this end, my dissertation presents a comparative analysis of protest in Tunisia and Czechoslovakia in the decade before their respective revolutions. In the relatively recent period in Tunisia (2000- 2011), I rely primarily on semi-structured interviews with different types of actors, exploring different forms of protest and state’s practices of control from the interlocutors’ points of view. In the more historical case of Czechoslovakia (1980- 1989), I rely mostly on archival research of Secret police documents that reveal the logic of repressive state practices as well as specific instances of political transgressions captured in these reports. While each case employs a different perspective, both exemplify the subversive potential of the micro-practices of resistance in authoritarian settings as well as various mechanisms of protest spread and transformation. The different time periods and geographical locations also help to break the prevalent regional studies approach to authoritarianism and examine the common logic of authoritarian
regimes, while paying attention to the different ways in which these regimes maintained power and the multitude of ways in which their citizens routinely resisted these practices, albeit in largely unorganized, individual manner. While these findings cannot be generalized to all authoritarian regimes, they present a first
step in creating a unified framework of analysis of the two types of protest that have so far been studied separately and in bringing together insights from different literatures in political science and
sociology to produce a better understanding of the nature and impact of protest in authoritarian regimes.