Hunting the pigs of the new world/wild

On the 3rd of June, Paul G. Keil, posdoctoral fellow of the Institute of Ethnology of the Czech Academy of Sciences and associate researcher at Cefres (member of TANDEM program “Bewildering Boar“) gave a lecture entitled « Piggers, pigdogs, and other pig-relations: a study of Australian hunting cultures at the feral pig–human interface ».

Paul G. Keil is a researcher in social anthropology. His PhD thesis, defended in 2017 at the Macquarie University of Sydney, devoted to the relations between humans and elephants in a village of Northeast India. His research addresses the socio-ecological implications of the interactions between humans and non-humans beings. Currently it focuses on the practices of hunting feral pigs with dogs in Australia.

Keil chose pigs for his research because of their relationship with humans, their symbolical component regarding culture, wildness and colonialism. Therefore, he showed that they are interesting subjects for investigating the population of Australian hunters. As he reminds us, unlike in Europe, there was no boar in Australia. The presence of wild pigs is due to the escape of domestic pig introduced by colonisers during the XVIIIth century. These feral pigs then became part of the landscape and started to develop some bodily attributes very similar than the European boar. Soon, they started to be considered as invasive and as pest, especially because of their impact on other species but also because of the damages they can do in farming installations. On a more abstract level, they were then imagined to be in shared relationship with colonial settlers as consequence of their symbolical implications of de-domestification and their representation of some kind of degeneration. As cultural animals living in natural spaces, free-roaming pigs were considerate as out of space of humans’ world and wild as well.

Feral pigs, as organism displaced and gone out of control, can be seen as one example of the new wild and the dramatic reconfiguration of the earth ecosystem. They show that there is no pristine nature or wild untouched or unaffected by humans. This understading led Keil to question about how the Anthropocene demands to rethink how we conceptualize the world, and our relationship to nonhuman world. 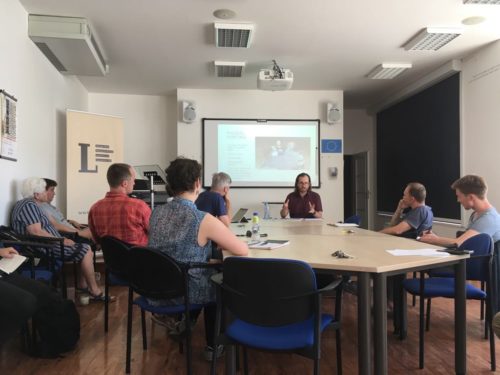 Paul Keil identified two possible representations about the problematic highlighted by the Australian feral pigs. The first view point can be find in the Tim Low’s book Feral Future (Low T, (2002) Feral Future: The Untold Story of Australia’s Exotic Invaders. University of Chicago Press) and the second in Fred Pearce’s book The New Wild (Pearce F, (2015) The New Wild: Why invasive species will be nature’s salvation, Beacon Press). On one hand, the biologist Tim Low, starting with the idea of an original stable ecology, underlines how the introduction of new species by humans will lead to destruction of the original wild environment and to a vulnerable ecological future. On the other hand, the journalist Fred Pearce chose to see in the consequences of new species’ introduction a dynamic change in ecology which will create some damages but also an increase of the biodiversity and a much strongest resilience in time of extinction.

Keil noticed that thinking about killing invasive species as an ethical activity is a common perception for Australian people. Taking in account that the feral pigs are not necessarily killed for their meat, he took this Australian specificity as an interesting starting point to understand how humans communities and nature interact. He also underlines the motivations and characteristics of Australian hunting practices and made a parallel with the Australian xenophobia.

These monstrous pigs are hybrid: « their body and potential are enacted through their relationship with humans, technology and other species ». Indeed, by their social, historical and ecological potential, pigs are seen by Keil as a composite reflection of an  relations. Free-roaming pigs permit to rethink how humans deal with « non-natural » wild animals. They draw perspectives about imagined environmental futures and show how the Australian people conceptualized the kind of beings allowed to be in Australia.

Keil sees hunting as a privileged activity to understand multispecies interactions. In Australia, hunting is considered to be a very popular recreational sport which count around 300 000 active participants. He noticed that in comparison to Europe, this is a highly unregulated activity, practiced alone or in group as family and friends, which focus mainly on introduced species. He underlines the existence of very different typologies of hunters and hunting practices. He chose to centre his studies on the pigdog hunting, inspired by the european practices, and involving at least three active species. Keil shows that the cultural variation in hunting practice, the choice of specific dog breeds, and the use of some technologies, such as GPS, diversify the human relationship with nonhuman species. Keil underlines that the study of embodied interaction is fundamental in multispecies ethnography. As he said, ethnographic observation of interspecies interactions in hunting can better reveals affective capacities of nonhuman and how it affects the performance of human identity.

These agencies produce different kind of representations about humanity and animality. To be hunted, an animal has to be wild. Feral pigs are not from the Australian pristine wild. The peculiar status of Australian feral pigs shows how hunters are conceiving their continuity and discontinuity with the non-human world. They are defining themselves as protective agent of the environment through killing as a recreational practice. Depicting their representation of some species introduced by humans as not belonging to the wild Keil showed how hunting practices are shaping the human considerations about the Australia’s new wild. Even if the feral pig are considered as pest hunters do not necessarily aim not to eradicate them, but maintain an ongoing hunting relationship with pigs.