Boko Haram: Islamism, politics, security and the state in Nigeria 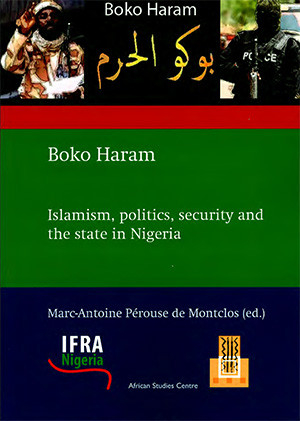 The second opus of the West African Politics and Society series (WAPOSO) focuses on the Boko Haram crisis in Nigeria. This book is the first attempt to understand Boko Haram in a comprehensive and consistent way. It examines the early history of the sect and its transformation into a radical armed group. It analyses the causes of the uprising against the Nigerian state and evaluates the consequences of the on-going conflict from a religious, social and political point of view.

The book gives priority to authors conducting fieldwork in Nigeria and tackles the following issues: the extent to which Boko Haram can be considered the product of deprivation and marginalisation; the relationship of the sect with almajirai, Islamic schools, Sufi brotherhoods, Izala, and Christian churches; the role of security forces and political parties in the radicalisation of the sect; the competing discourses in international and domestic media coverage of the crisis; and the consequences of the militarisation of the conflict for the Nigerian government and the civilian population, Christian and Muslim.

PART I: What is Boko Haram? Some evidence and a lot of confusion
2- The message and methode of Boko Haram
Kyari Mohammed
3- Boko Haram and its muslim critics: observations from Yobe State
Johannes Harnischfeger
4- Traditional Quranic students (Almajirai) in Nigeria: fair game for unfair accusations?
Hannah Hoechner
5 Christian perceptions of Islam and society in relation to Boko Haram and recent events in Jos and Northern Nigeria
Henry Gyang Mang
6. Framing and blaming: discourse analysis of the Boko Haram Uprising, July 2009
Portia Roelofs

Annexes
1. The charter of Jama’at Ansar Al Muslimin Fi Bilad al-Sudan
2. One of the first videos of Ansaru, available on 1 June 2012
3. Islam and Western education in Nigeria: Between accommodation and confrontation
4. Islam and political parties in the Sudan